Base Jump from the Fumaça: The making of

"The making of" Fumaça Base Jump

The making of
Base jump Fumaça waterfall >> 03/02/2016 >> 9:12
Fumaaaaaçaaaaaa ! !
Diamantina Mountains is proud to realize the extreme dream of Ashley , a professional Base jumper from Australia.
Thanks to an important briefing about security everything went well.
Special thanks to Emerson, an experienced guide we managed to get Ashley safe to the town of Lençóis
and Guira, guide from Capão for making the video on the top.  A few days later Guira guided Ashley to the Cachoeirão waterfall for his next jump.
How it started
It all began on the 13th of January with an email of Ashley.  He wanted a guide from the bottom of the Fumaça waterfall.  I replied” Ok, we can arrange that.  But how are you going to the bottom of the Fumaça waterfall ?” Then Ashley replied that he was planning a base jump off the Fumaça waterfall.   He convinced me of his skills by showing a video of his base jumps from other waterfalls.
Preparations 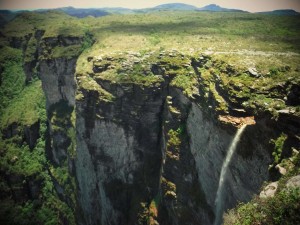 2016 February 1
Together we did the easy hike to the top of the waterfall.  He was sure that if the wind would be normal, the jump was going to be easy.  We discussed important security signals and planned Ashley’s jump for February 3.
2016 February 2
Emerson and me, we hiked down for 4 hours to the camping spot in the middle of the canyon.  We went asleep at 21:30 because we had to wake up VERY early. 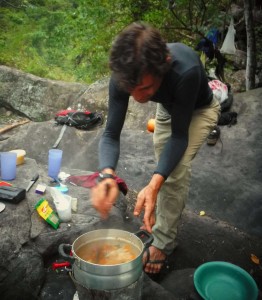 The day of the jump
2016 February 3
04:00
Before dawn at 04:00am, we woke up because we had to be at 06:00 am at the bottom of the falls.  We had to walk in the dark on a very difficult trail full of big, green rocks.  We turned on our radio at 05:30 and had quick contact with Ashley who was up there with Guirá in the freezing winds.  We confirmed that the winds were normal at the bottom.
We stumbled and fell a few times and hurt ourselves a bit before arriving on the bottom of the waterfall.
06:00 We lost radio contact due to technical problems of Ashley’s radios.  But we started plan B, a huge yellow badge on an enormous rock. We managed to inform Ashley the situation of the calm wind  thanks to this signal.  The wind was very calm, so Ashley could do the jump.  Only one problem, the top of the falls was completely in the clouds.
07:00 The top was still in the clouds… another cup of coffee…
08:00 The top was still in the clouds but the clouds were much less.  We shouted and they shouted back, but we did not really understand….another cup of tea.
09:00  The clouds were really disappearing so we prepared us for a jump to come…
09:11 Suddenly there was a freaky noise like a plane falling from the sky, but of course it was Ashley who just did his jump.  I grabbed my camera and managed to make a video of the landing of Ash.
Oh man, we were all so happy that everything went well !!  It was an ecstatic moment.
10:00 Drying the parachute took a lot of time.  In the mean time we had coffee, made some crazy pictures and enjoyed the incredible canyon.

12:00 We started hiking downstream to the Capivara camp.

In the afternoon, we took a great swim in the Capivara waterfall and enjoyed a campfire at night.
Days after the jump
2016 February 4
The next day we passed by the Palmital waterfall and the Ribeirão do Meio rockslide and got safe to Lençóis. 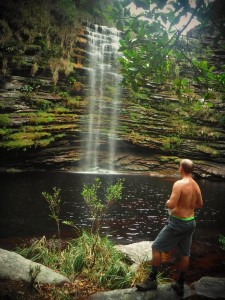 A few days after his jump Ashley tried to jump the Pai Inacio hill, but it was too windy.  Luckily he got to the Cachoeirão waterfall with Guira and did another incredible jump.
A month later he would do his ultimate dream jump : a base jump off the Angels falls.
Check this video for all his jumps in Brazil.
****
The Diamantina mountains team

This website uses cookies to improve your experience while you navigate through the website. Out of these, the cookies that are categorized as necessary are stored on your browser as they are essential for the working of basic functionalities of the website. We also use third-party cookies that help us analyze and understand how you use this website. These cookies will be stored in your browser only with your consent. You also have the option to opt-out of these cookies. But opting out of some of these cookies may affect your browsing experience.
Necessary Always Enabled
Necessary cookies are absolutely essential for the website to function properly. These cookies ensure basic functionalities and security features of the website, anonymously.
Functional
Functional cookies help to perform certain functionalities like sharing the content of the website on social media platforms, collect feedbacks, and other third-party features.
Performance
Performance cookies are used to understand and analyze the key performance indexes of the website which helps in delivering a better user experience for the visitors.
Analytics
Analytical cookies are used to understand how visitors interact with the website. These cookies help provide information on metrics the number of visitors, bounce rate, traffic source, etc.
Advertisement
Advertisement cookies are used to provide visitors with relevant ads and marketing campaigns. These cookies track visitors across websites and collect information to provide customized ads.
Others
Other uncategorized cookies are those that are being analyzed and have not been classified into a category as yet.
SAVE & ACCEPT